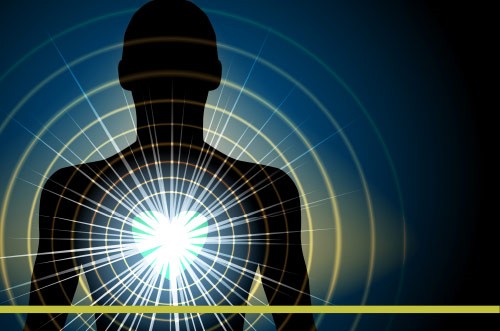 Here are physicist Mike Wright’s Comments on the ambiguous use of the word “energy” in the health and wellness community.

…Your use of the term “energy system” without a rigorous definition prompts me to encourage you not to forsake your training as an engineer too quickly. I’ve studied the oriental systems for almost thirty years. I have a degree in physics and have diligently kept abreast of current events in that field. There is a temptation to label the oriental perspective as “mysterious” and either accept it or reject it as such without seeking Western correlates.

If I asked you, as an engineer, to give an accurate but non-technical explanation of how a telegraph system, desk-top computer or TV/VCR worked, I’m sure you could do it easily. So, when asked to give a similar explanation of the psycho-biological system, perhaps you haven’t seen the correlation: input, process, output.

The telegraph, computer or TV/VCR receives a signal from something outside of the system, something in its environment, usually a human tapping the keys. It processes the signal according to its design and generates a response.

Those who investigated chi and meridians earlier this century had a bias towards classical physics. They assumed they would find separate little wires to propagate the chi just like they had found separate systems to propagate blood and chemical nerve signals. When they didn’t find the wiring, they concluded the whole thing was a myth of the mysterious orient rather than considering that maybe their assumptions were erroneous or that their tools were insufficient.

In recent years, much has changed. You’ve referred to the work of Becker and some of the other work cited by Callahan. Here’s more: If you haven’t read the work of Fritz Popp and Walter Kroy in Electromagnetic Bioinformation, get it through interlibrary loan. It lays out the engineering of the biological organism so clearly and the research was done in the 70’s. All of the other works in Callahan’s bib support the idea that the energy system” is electro-mechanical, electro-optical, electro-acoustic, electromagnetic AND can be directly engineered just like VCRs and computers.

This does not reduce a human being to a mere machine. The biological system is a machine, but the operator is outside of the system. Thus there is a simple perspective for mind, spirit, soul, reincarnation, all the mysteries. Stanford cellular biologist Bruce Lipton has done outstanding work on describing the system, the operator and the interface.

Thomas Bearden (you’ll find his recent work on the internet, search authors in Yahoo!) has also done wonderful work on direct engineering of quantum virtual states and nested hyper-realties. He ties in the relationship of spirit, soul, mind, body and electromagnetics. His books, “AIDS: Biological Warfare” and “Excalibur Briefing” provide excellent syntheses of his work, although they are dated as to the Soviet Union.

The work of Bohm and Pribram provides another piece. In summary, our brains mathematically construct “concrete” reality by interpreting frequencies from another dimension, a realm of meaningful primary reality that transcends time and space. Remember this is from a neurosurgeon and a physicist, not an Eastern mystic. A nice summary of their work can be found in “The Holographic Paradigm,” edited by Ken Wilber in 1985. Note that thoughts are frequencies. They aren’t necessarily generated by the brain, but the brain can act as a receiver of thought, so once again we are not reduced to being mere machines. Spirit, soul, mind can signal the brain.

“Some experiences are related to what is unconscious in us – to processes for which there is consciousness but no awareness. In quantum theory, these are situations in which the quantum state does not collapse but goes on developing in time according to the dynamics of the situation. The unconscious dynamics, however, may play a role in later conscious events. This aspect allows us to verify the effects of quantum interference in experiments of unconscious perception.” – McCarthy, K. and Goswami, A. “CPU or self-reference? Discerning quantum functionalism and cognitive models of mentation” Jnl of Mind and Behaviour. (I don’t have the date of publication, it was in 1993 or 1994.)

This could be the technical definition of Callahan’s p. Goswami is a physics professor at the University of Oregon. He wrote a book called “The Self-Aware Universe: how consciousness creates the material world” from which I took the above citation.

Let me put it all together briefly: The human body is the most advanced and elegant “machine” system around. It is self-repairing, self-replicating and evolutionary. It can adapt to ambiguities and an ever-changing environment. We (spirit, soul, mind, personality) use it to explore and relate to the physical environment. It is a vehicle, just like the Mars lander. (There is no metal and silicon-based machine ever made that didn’t get its start in the mind of a human.) It receives a variety of signals, processes them and generates responses.

Tapping a meridian point delivers mechanical energy to a key. The energy is converted to an electrical signal that is propagated through the cells of the connective tissue (fascia, tendons, ligaments) by way of resonance (Popp et al.) and electron transport in the cell membranes (Lipton) and the microtubules (Penrose and Pribram) within each cell. This signal acts as a carrier wave. The tuning is essential (Callahan) in that it is the modulated information that is nested in the carrier (Bearden). The modulated signal collapses the superposition of quantum states that are causing the interference (McCarthy and Goswami). Thus the rapid change in system output (behavior, expression, affect, etc.). It is no different than adjusting the color, contrast, focus and brightness on the TV in order to get a clear picture.